Denmark Firefighters bridge the distance in the 2021 Firefighter Stairclimb Challenge

In the words of Camilla Abildqaard Norup with translation by Sten Vedel. Originally published by Herning Folkeblad/Ikast Avis.

Two firefighters from the station in Engesvang, Denmark threw themselves into an international challenge last Friday, which involved 1,204 steps in a 20-kilo worksuit.

ENGESVANG: The challenge spoke for itself as two pressured men climbed 20 times up and down the stairs in the tower between two water tanks at the firestation in Engesvang on Friday afternoon. The idea itself may seem a little crazy, but it’s taken from the Canadian fire department, and the purpose is noble.

Kristian Madsen, Team leader for the fire brigade in Engesvang, participated in 2018 in the “Firefighter Stairclimb Challenge” in Calgary, Alberta for the first time, as the only European.

“I heard about it because I have a cousin who is a firefighter over there in Calgary. It’s something they do to raise money for cancer-stricken people including firefighters and their families. As I myself was diagnosed with cancer in 2017, I used the challenge as a goal to train myself again,” Kristian said.

Just over a year after being diagnosed with cancer, Kristian took a flight to Calgary to participate in the event then held at “The Bow”. He completed the physically exhausting 1,204 step climb, wearing the 20-kilo heavy suit that he and his colleagues wear to fight fires in Denmark.

“At the time, I managed it in 18 minutes and 16 seconds. This is my best time so far, and I do not come close to that today,” said Kristian.

Kristian participated again in 2019, but like so much else, the 2020 event had to be scaled back due to the pandemic. This year, however, the organizers made the challenge virtual, and therefore stairs at the fire station in Engesvang were taken into use. It also gave rise to enticing firefighter colleague Sten Vedel to take on the challenge.

“I have been fooled into it without quite knowing what I was getting into,” said Sten with a smile.

“Denmark is a small country without high mountains, so The Bow building in Canada is actually higher than the highest mountain in Denmark. They laughed a little when I was over there for the first time. When you stand on the top floor and look out, you can see Rocky Moutains. You cannot do that here, but you can see Bølling Lake,” said Kristian.

By the time the clock approached 16, 50 people had turned up to watch the two firefighters climb up and down.

“We had to reach the same number of steps as in The Bow. Such a high-rise building does not exist here in the area, so we had to go up and down 20 times and finally take 24 extra steps, to reach the goal. It is only the steps up that count,” Kristian explained to the public.

Prior to the climb, the tower at the fire station was approved by the Wellspring Calgary organizers, and subsequently, photo documentation of the participants’ sports watches and timing equipment had to be sent.

After a welcome, the two firefighters pulled on their uniforms, fastened their helmets, and got ready the fire brigade siren to give the start signal.

The first trips up and down were at a high pace – probably significantly faster down than up. The two firefighters brought different style. Sten Vedel quickly ran off, while Kristian Madsen kept the same steady pace.

During the training in the weeks leading up to the challenge, the times had been between 23 and 25 minutes. But Friday was a few degrees warmer, and it certainly did not make a positive difference. Fortunately, the weather was dry, so the steel steps were not wet and slippery.

Never seen so much pressure

Not even Sten Vedel’s daughter’s remark, “Come on thick man,” made Sten lose his focus, he just shouted back, “What about you!”

Sten’s daughter Stephanie Bruun, and his wife, Lotte Bruun, agreed that they had never seen Sten so pressured before.

“Not even after his first half marathon did he looked like that in the face. He is clearly under pressure,” said Lotte. 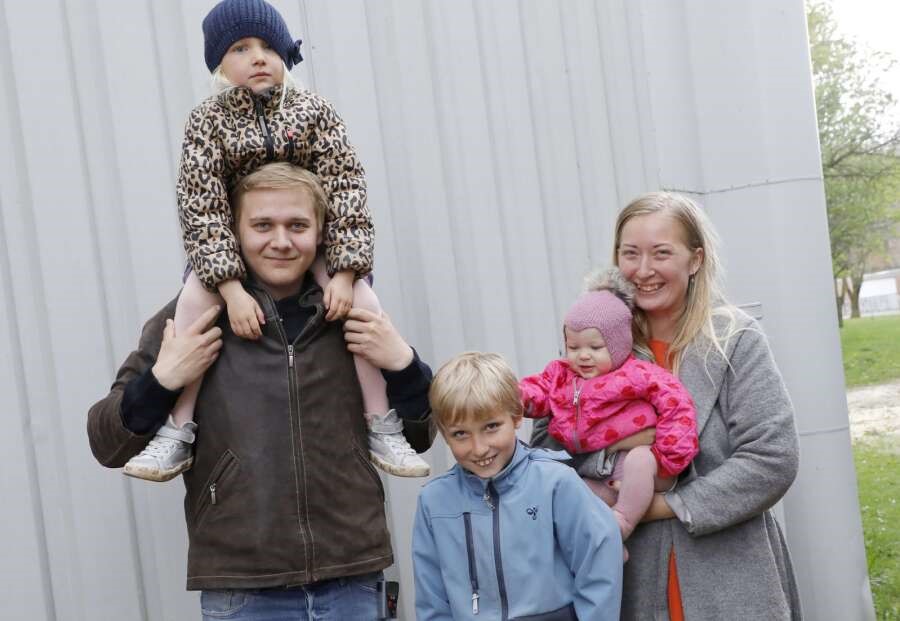 After the last intermission, it became clear the two men did not have record times, but dyill they finished to great applause and cheering. Sten’s time was 24 minutes 52 seconds, and Kristian finished in 25 minutes and 5 seconds.

“In Canada, there were beautiful girls who welcomed you and made sure that you came down with the elevator. Here it’s a little something else,” said Kristian wife Lotte, with a twinkle in her eye.

After a celebration of cake, coffee, and soda, the two brave firefighters gathered to thank all their supporters.

Then Kristian offered Sten his cherished Canadian Fireman’s pen, which he had brought home from Canada

“You must have it, because you wanted to be part of this crazy idea. Thank you for that,” said Kristian.

Firefighter colleague Simon Haarup Jensen had chosen to watch while his colleagues took up the challenge. He brought his wife Olivia and children Lucas, Josephine and Isabella with him. “I have to consider whether I should try next time, but I am afraid that the two middle-aged men are faster than me, and it is a bit embarrassing,” said Simon.

The two firefighter colleagues also managed to share their common desire to spread the special stairclimb event in the entire Danish country.

“We have an idea to spread it, as part of the ‘Break Cancer’ collection. It could be really cool to get more Danish firefighters involved,” says Sten.

“So I wonder if we will see more local firefighters climbing stairs in the near future.”

Normally, about 500 firefighters participate in the challenge, and they each pay a participant fee of $250 CDN, which is about 1000 dänish kroner.

A total of almost DKK 750,000 was collected in last year’s “Firefighter Stairclimb Challenge” – including a contribution from the two Danish firefighters.