I want to Volunteer

In the fall of 2017, 55-year-old Kristian Madsen, who is a volunteer in Fire & Rescue in the Midwest Germany, found out he had prostate cancer.  Just a few months later he was back in fire gear, and this month he’s flying to Canada to compete in the Calgary Firefighter Stairclimb Challenge.

“Friday, September 8, 2017, is a date I will never forget.  Doctors suspected I had problems with my bladder, but a colonoscopy proved instead that it was cancer,” said Kristian.
For the 55-year-old foreman from Exeter, who for 10 years has been a volunteer fireman for his town, he stood for a moment completely quiet in the world.

“I was very shocked. I had not thought it possible. Something like that happens, of course, but always to the neighbour or a stranger— never to someone like me — so I hadn’t even taken my wife to doctor’s appointments,” said Kristian.

“The first thing I thought was that I had no time to waste,” said Kristian.

Working as a volunteer filled a great part in Kristian’s life. It was not in his thoughts that he should work in emergency services, but a friend approached him and he agreed to attend an event at the fire station. An hour later, he had signed on as a volunteer.

“Right from the first deployment, I could feel that this was for me. Together with the other team members at the fire station things were really good. I got a lot out of trying to make a difference for others, “ he said.

It was a huge blow to get diagnosed with prostate cancer. For Kristian, this meant that for a period he had to take a leave from his volunteer duties and concentrate on getting healthy.

A few weeks after the conversation with the doctor, Kristian had surgery. The first few days after surgery, he was, as he himself describes it, completely out of service. But it wasn’t long before the strong-willed volunteer migrated back to the station.

“I went 6-700 meters from our home and over at the fire station. The first few times it took an enormously long time to walk the route, but after a bit, I was faster and faster. I came over to the fire station, swept the garage, I checked the trucks and assured that everything worked. There was not a lot to check over at the station but it was important for me to get out and at it again as soon as possible,” he said.

A few months after the operation Kristian was in good enough physical shape to return to volunteering. He never had any doubt that he was going back to work in emergency services.

“It is my calling to be a volunteer fireman, and therefore I could not imagine stopping. I do not think my family could imagine that I should not be a volunteer fireman. It is such a big part of me,” he said. “Doctors do not believe that my cancer was the result of my work as a firefighter. They say it’s more likely that it is hereditary.”

But the cancer diagnosis has given Kristian some things to reflect on. Even if there is no proof that his prostate cancer is caused by his work as a fireman, he has taken extra precautions in dealing with smoke and soot.

“I’ve actually always been good at keeping good hygiene in connection with my fire gear and my equipment, but obviously I’ve become more aware of how important it is to make everything clean. That is why I also joined a working group to develop a picture guide to how to take care of himself and his equipment according to policy and the manufacturer’s code, “he says.

“I’ve been very open about my cancer, and it has certainly helped to make my colleagues more conscious about the routines we have, and how important it is that we remind each other to abide by them.”

Training for the great competition

During the course of the disease Kristian emailed his cousin, who lives in Calgary and is also a volunteer firefighter. His cousin told him about the Calgary Firefighter Stairclimb Challenge and he shared that the event brings awareness to cancer and the risks associated with being a firefighter.

“I was pretty curious when I heard about the competition. My cousin told me that there were participants from Canada and The United States. I asked if I could also participate and my cousin found out that I could,” he said.

That’s when Kristian went into full training mode to gear up for the climb. One of his colleagues at the station developed a training program for him and began coaching him three times a week, in full duty gear.

“There must definitely be someone who thinks I’m crazy, but I have only met with support from my colleagues and my family. They think it is cool that I’m taking up the challenge,” he said. 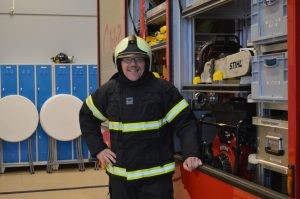