Red Deer Has What It Takes

While Red Deer has a multitude of wondrous qualities, this year it can add to the list … a set of ‘Competitive Stairs’ for firefighters who are competing in the 7th annual Firefighter Stairclimb Challenge in support of Wellspring Calgary.

Wellspring Calgary is a registered charity that offers free programs and services that meet the emotional, social and practical needs of people living with cancer and their loved ones. It serves southern Alberta from Red Deer south to the Canadian border with two centres and a robust online community of support.

From May 2 – 15, firefighters and members of the public will step up to raise funds to help those living with cancer by participating in the virtual Firefighter Stairclimb Challenge. In previous years, this was a live event at The Bow building in Calgary, but this year it will be virtual – with new ways to involve and engage participants. What remains the same is that individuals and teams will still have to climb the same number of stairs as The Bow building, 1,204 steps (774 vertical feet), and firefighters will climb in full duty gear – roughly 45 pounds!

With individuals and teams joining the Stairclimb Challenge from all over the country – and even as far away as Denmark – those who have registered in the central Alberta region are invited to train and compete at Red Deer’s Heritage Ranch. This awesome location offers participants free parking, shade, and spectacular river scenery. The staircase has 165 steps so those competing will have to climb eight times. Firefighters will compete in full duty gear as they vie for the fastest time prize of a custom helmet.

Firefighting is a dangerous occupation on so many levels, including cancer. According to the Workers’ Compensation Board of Alberta, there are 16 presumptive cancers recognized as occupational hazards related to firefighting. This event spotlights firefighters and underscores the risks they take every day when they go to work.

This event reflects how Wellspring’s mission relates to the important work firefighters do. Proceeds from the Firefighter Stairclimb Challenge ensure Wellspring Calgary can provide programs and services to firefighters and all citizens living with cancer. Wellspring also proudly gifts a portion of event proceeds to support the Firefighters Assistance Charitable Society (FACS), whose mission is to empower and strengthen firefighters by enhancing the success and resilience of the firefighter community.

Irina Peters moved to Red Deer from Europe in 2009 and cultivated a sense of belonging by volunteering in the community. In 2014 she began volunteering as a firefighter at Red Deer Protective Services, and by 2015 she was a fully qualified active member and loving it. 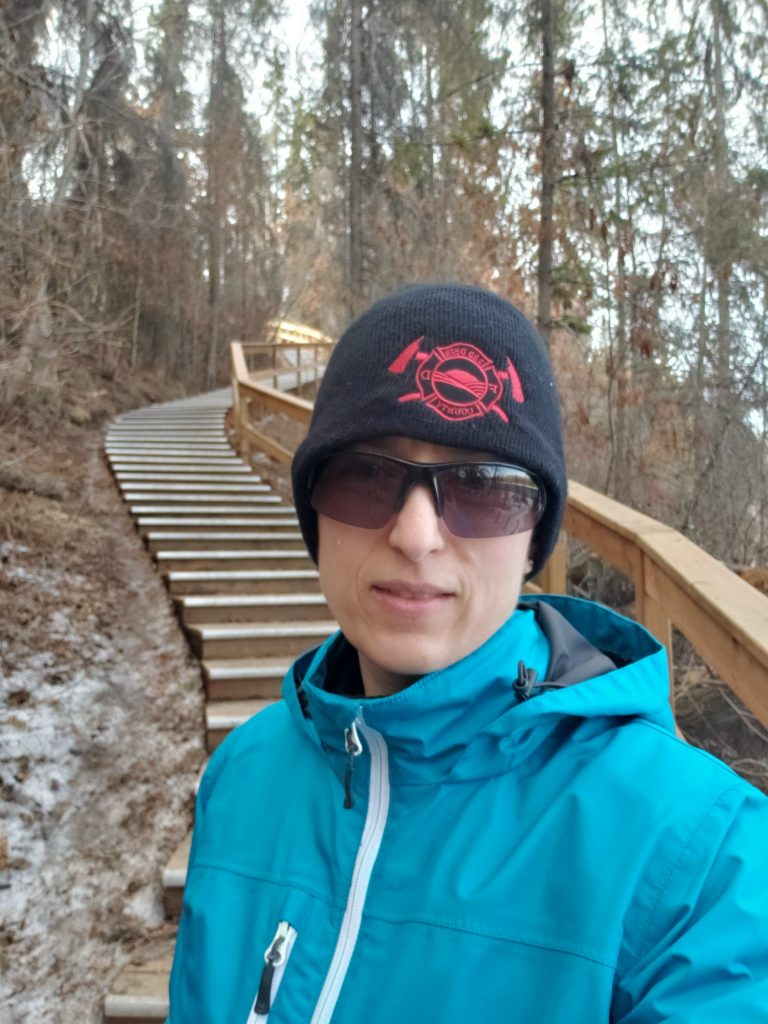 “Firefighters as well as all the first responders are selfless people who serve their community with pride,” she said.

In 2016, when Irina learned about the Firefighter Stairclimb, she was eager to jump onboard.

“I’m a fitness enthusiast and this challenge met two major components that raised my interest, helping my community and proving my fitness,” Irina shared.

Over the past five years Irina has been an avid, outspoken participant of the Stairclimb: raising funds, creating awareness, and motivating others to join as well. Each year she steps up to lead the Red Deer County Fire Team, and she participates enthusiastically while honouring acquaintances, friends, and relatives fighting cancer.

“It was a bit overwhelming to be there at The Bow surrounded by so many people from all over the world, competing and supporting each other on the day of the climb. Suddenly you are not alone. We are one,” she said, adding that virtual climbing is not as exciting, but still she believes in the event.

This year Irina is more deeply impacted as two members of her family are battling cancer and she is also climbing for her friend Sven, a former firefighter from her department also diagnosed with cancer. Add to that, the pandemic makes it harder to fundraise and train than in previous years.

“Either way, climbing 55 floors in full gear will be a breeze compared to what those fighting cancer are going through,” she said. “I will do it for them. I won’t give up.”

Everett Wood has been a firefighter at Red Deer County Services for five years. Though he came late to the Firefighter Stairclimb Challenge, he’s not finding the training too tough since his full time job in interior woodworking tends to push his physical limits.

“I do hardwood in stairs or railings and sometimes I end up doing 40-60 flights of stairs in a day,” he said. Asked if he has a connection to the cause, Everett shares that he lost his dad to cancer five years ago. “I also have friends who have had cancer and beat it, but unfortunately that’s not the outcome for everyone.”

“When I was 19, I joined the Red Deer County Volunteer Fire Department and I got some really great skills and experience. This motivated me to become a paramedic and following that I went into police work,” said Brad. After a stint as a first responder and volunteer firefighter in Peace River, and following a move to Lethbridge to attend university, Brad became a Peace Officer with Alberta Health Services. He has now come full circle, residing in Red Deer where he is back on call with Red Deer County Fire Services while studying for a master’s degree.

“It’s been an interesting path that’s for sure. I think I’ve worn every kind of uniform except military,” said Brad.

Brad has known about the Firefighter Stairclimb for years, but this is the first year his work schedule allowed him to participate and join Irina on the Red Deer County Volunteer Fire Team. Training on outdoor stairs has been tricky with the intermittent snowfall but he and others train a few times a week, running and marching with 45-pound weighted pads.

“I know about the cancer risks that come with the job but also, I know people – friends and family with cancer. Last year, my uncle lost his life to cancer and two others in my family have also been diagnosed. One has beat it but another is just starting treatment,” said Brad. “It won’t be easy but I’m excited to do this challenge and I hope to motivate others to join too – a good way to bring awareness to the Wellspring.”